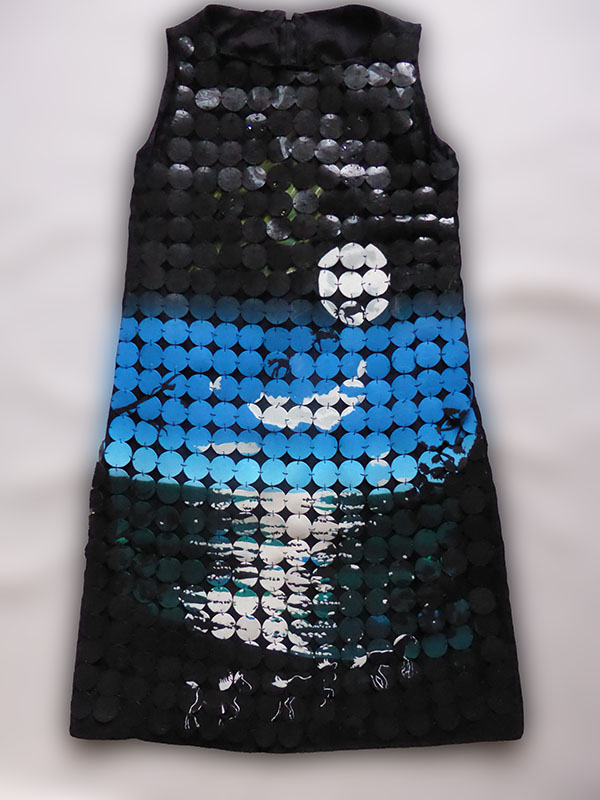 In Sweden, Ursa Major (Karlavagnen in Swedish) is the constellation that ”everyone” knows. It also points directly to Polaris (Polstjärnan). We Swedes associate it with the winter season, because during our bright summer nights it’s rare to see the stars. On the other hand, a sparkling cold midwinter night out here at the countryside, where everything is completely black, it is like the stars shine so clearly that you can hear the sound of them.

Karlavagnen has a special place in my heart, and it is also included in the dress with which I won the IPCA Awards 2015.

Yes, you read it right. I have made a dress in which the front has a motif in polymer clay. The dress – Moonlight dress – primarily shows the moonlight that reflects in the magic lake Roxen, but if you look at the sky I have also added the Karlavagnen with Swarowski chrystals. The fabric under the starry sky, shines in green veils – this symbolizes the northern lights/aurora borealis (norrsken), that we sometimes can see here in the southern parts of Sweden.

This is a December calendar with brief views in alphabetical order throughout advent, over Christmas and until New Year’s Eve. Every day is a new word.
I am very interested in your thoughts on these subjects. Please share them in the comments field below. <3