Valhalla is found in Norse mythology and is the place where the main god Odin lives. Viking Warriors who die in battle may get there to accompany him. They go out and fight the giants every day, die in the battles, but resurrect and participate in the big party every evening where they eat the pig Särimner, among. Which, of course, also resurrects every day to become dinner again, and again, and again 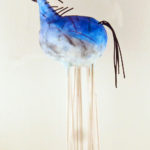 Because I live in Sweden, the old Norse mythology is interesting to combine with your creativity. Especially as Odin (of course) has a horse. It’s called Sleipner and has eight legs. As a result, it can run faster than any other horse. I have made several different versions of Sleipner, and also a horse sculpture called faster than Sleipner – it has 16 legs and must be twice as fast 😊
A sculpture that means a lot to me is called Korpen Flyger (The raven flies). The inspiration to it came from a concert with the Swedish metal band Amon Amarth. Their lyrics are often inspired by the Viking era, and the power of their music created pictures in my mind of a horse running together with a gigantic raven on its back. The raven is also very important in Norse mythology. Among other things Odin has two ravens called Hugin (thought) and Munin (Memory) that he sends out every day to scan the world, returning and telling him what has happened during the day.

This is a December calendar with brief views in alphabetical order throughout advent, over Christmas and until New Year’s Eve. Every day is a new word.
I am very interested in your thoughts on these subjects. Please share them in the comments field below. <3