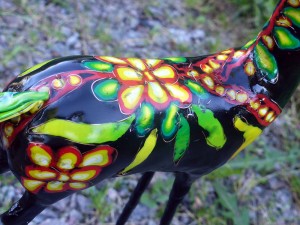 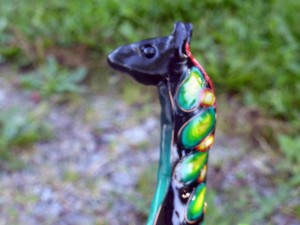 Well, I did not succed with this one. Or – it is a very nice and goodlooking horse, but it did not turn out as I wanted.

My intention was to make the horse look like it was covered with cloisonné. In some areas, the effect became what I wanted and in other areas it did not. The biggest challenge was to get the copper wire level with the canes. In the areas where it was to near the surface, I sometimes damaged it when sanding. In other areas the copper wire was too deep in the clay to be ”found” while sanding.

I will have to rethink the process. In some way or another I will succed even if it takes a lot om time, but I promise that I will tell you about how I made it in this blog!