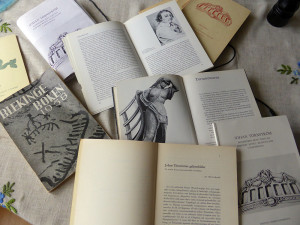 As I explained in my blog post yesterday, I want to make a figurehead horse in honour of my ancestor Johan Törnström. I have read a lot of books and articles about him, and I understand that he was a very special, a very creative and a very temperamental person. His artistic talent was so strong that it is still found among his descendants hundreds of years later, including me. It is a heritage which is important to take care of, and I am beginning to understand that I am not doing it just for myself and my own wellbeing, but for the whole and old Törnström family.

First, I have to find a figurehead to make my interpretation of. I have chosen Försiktigheten (Prudence) because it is a figurehead with a lot of temper, and I also think that it has potential to come out quite nicely as a horse. One problem that I have to solve during creation is what the horse should keep in his hand/hoof. The original figurehead Prudence carries a medusa club (a man’s head), but I do not think that is something that a horse should carry, It would make the sculpture too scary.

This is the first sketch before I start to sculpt. The polymer clay figurehead vill be approximately 20-30 cm high. I do not know the exact height of the original figure head, but it is several meters high and weighs 980 kg according to the Naval Museum