The first day of the Christi Friesen Creative Cruise all people talked a lot to eachother. It is of course necessary when there is a large group of almost 40 persons who do not know each other. Yet. It is so interesting with all nationalities to get to know each other. Here are Japanese, Americans from various states, Australians and so me from Sweden. 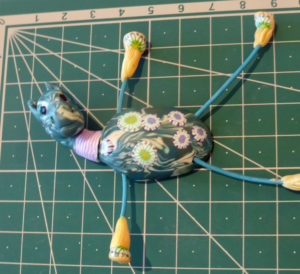 The day has been really full of acitivities. This morning I first attended a workshop with Mami Kelly. She teached and showed us how to create one of her very special cats. Since I translate everything I see into horses my creation was not very catlike, it received little hoofs instead of paws and gradually developed into a little ”Hugging Horse”.

The afternoon was spent at Ho’okipa Beach. It’s not really a beach for swimming but a pretty wild and barren beach. While surfers, windsurfers and paragliders enjoyed the big waves we clayers examined the lava formations and vegetation on the beach. I went barefoot, and the dark red ground was so hot in the sun that it burned the soles of my feet. Sketch blocks were filled with inspiration and impressions.

For me, it was the meeting with the big water turtles that was one of the highlights. Of course, my brain began to think about how to combine a turtles slow and pensive beauty into a horse …

Now, it’s almost nine in the evening and it is still a hive of activity in our polymer clay room. But now it is much quieter, people know each other and work more concentrated, enclosed in themselves. Though occasionally the silence is broken by loud and happy laughters.